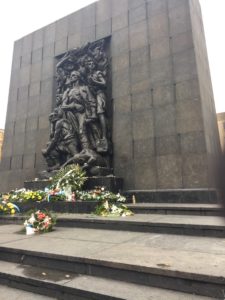 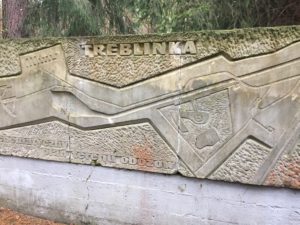 Our trip to Poland in November with the HUC-JIR Board of Governors was life changing.  By the 1930’s, Poland had 3.5 million Jews.  There was a time where half of the Jewish population of the world resided in Poland.  It is estimated that 80% of all Jews living in America are originally from Poland.  For centuries, Poland was truly the center of Jewish life. It was a thriving culture of learning, commerce, art, literature and music, representing multiple Jewish theologies from Hasidism to Zionism.  Poland was such an amazing place for Jews to live that the RaMaH (Hebrew: רמ”א‎), Rabbi Moses Isserles, the greatest commentator on the Shulchan Arukh, who was born in Krakow and lived in the early 16th century, is quoted as saying, “Better to live in Poland with a dry crust of bread than to live anywhere else.”

One can see a thriving community pre-WWII as you walk the Jewish cemetery of Warsaw observing some of the beautiful tombstones that remain containing poetry and artistic vibrancy.  And then, there are two grassy fields roped off with crime scene tape indicating the mass graves from the Warsaw ghetto, where 84,000 Jews starved to death and many more died from a host of unpleasant horrors.  Their bones cried to me, “Don’t just remember our suffering, remember our lives, our dreams, our vibrant Jewish existence!”

The sun never came out. Cold and wet, we traveled and learned together.  We, who sustain our Reform Movement’s academy, our seminary training rabbis and cantors, educators and non-profit managers, were renewed in our purpose to keep Judaism alive – for those who perished and for all of us – for your children and grandchildren, and mine.

I don’t think I understood what Treblinka, on the outskirts of Warsaw, was until I got there.  It was not a work camp. It was not a concentration camp.  It was a death camp.  From arrival to death took four hours.  900,000 Jews were systematically exterminated in one year alone.  And the gratuitous shaming, violence, and beatings before those deaths made me hate the German death machine and the Poles who carried it out even more than I already had. The level of inhumanity exceeded anything I had previously understood about the Holocaust.  When they ran out of mass graves, they just burned the bodies that had been gassed with carbon monoxide on railroad tracks outside the gas chamber.   And even there, as they had in Warsaw, some Jews rose up and fought back, believing that to die in protest was better than to die in silence like lambs to the slaughter.  And their uprising ultimately led to the closing of the camp.

In the silence of Treblinka’s forest, surrounded by trees that bear witness to the unspeakable horrors of a death camp leveled into a farm after it was closed so that the world would not see, I pledged to witness to the genocide of my people with renewed vigor.  For every one of them, we must dedicate our lives to Jewish life, to Jewish survival, to Jewish pride and practice without compromise or apology.

Treblinka strengthened my resolve to fight for quality Judaism; a Judaism practiced by a people who make the beauty of our heritage the center of their lives.  My time in Poland reminded me that the greatest population and center of Jewish life was eradicated in the blink of an historical eye, and even if we say, “Never Again!” we cannot guarantee that pledge anywhere anti-Semitism exists and is allowed to rear its ugly, hateful head.

In Poland, only 25,000 Jews out of millions remain.  We are all witnesses and we are all keepers of the flame of memory.  Our children must be proud Jews, knowing who we are and where we have come from, what we believe and what we stand for, and what symbols are ours to cherish and what are not.

Every Jew who walks away from our faith and history, or assimilates putting personal choice over communal survival, irreparably harms our people, dishonors our history, and compromises our future.  And every Jew who belongs, sustains, chooses Judaism by birth or by choice, replants seeds of our Jewish forest and sustains our traditions and heritage. You, my beloved TBS stand with Judah Maccabee, dedicating heart and soul to survival of our sacred story.

I am not a Jew because of the Holocaust.  I love being Jewish and doing Jewish.  I love Torah and Temple.  And this Chanukah (which means ‘rededication’), I feel a renewed obligation to not take today’s freedom for granted.

When Jews left their homes for the Warsaw ghetto and the camps, everyday Poles moved in and took their belongings, erasing their lives.  In a moment, we were gone from the city and wiped off the horizon. This is the season to remember that we do not don the coat and symbols that are not ours. For to do so, dishonors those who gave their lives as human sacrifices on the altar of world hatred and inhumanity.

Let us light our menorahs for what was, for those who lived and built and dreamed, for the martyrs and the fighters, for their courage and resistance, for the children and the weak, for those who perished with prayers that we might survive still in their hearts.

Let us light our menorahs and pledge to make our TBS community a temple of welcome and blessing, hope and faith, remembrance and dedication.

May our Jewish lights shine into the darkness of our past, beckoning us to be the light of the Jewish future, not just at the time of our festival of lights, but every day of our lives.