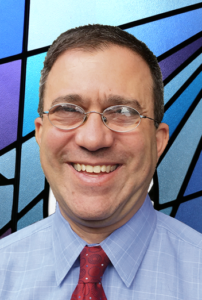 Temple B’nai Shalom is excited to announce that the congregation has selected Rabbi David S. Widzer as its new Senior Rabbi and spiritual leader, effective July 1, 2020.  Rabbi David S. Widzer has served as a rabbi for twenty years, bringing his love of Jewish learning and living to every community he has served.  A gifted teacher of all ages, an engaged and inspiring worship leader, and a passionate pursuer of social justice, Rabbi Widzer is committed to creating connections and opportunities for families of all kinds who choose to live Jewish lives.

Rabbi Widzer served as the Rabbi of Temple Beth El of Northern Valley in Closter, NJ from 2012-2019.  During his time at Temple Beth El, the Rabbi, in his own words, “promoted values-based decision-making, mindful engagement of our members, and education innovations that have strengthened the community and enriched the Jewish lives of our members.”  He led the community in a process of assessing and planning for its future, resulting in the creation of Kol Dorot: A Reform Jewish Community, when Temple Beth El merged with Temple Beth Or in Washington Township, NJ.  Rabbi Widzer presently serves as one of the two founding Co-Rabbis of Kol Dorot.

From 2006 to 2012, Rabbi Widzer was the Rabbi of Temple Etz Chaim in Franklin, Massachusetts, where he focused on reaching unaffiliated members of the Jewish community, developed programming to appeal to a wide range of demographics, and participated in interfaith collaborations. From 2000 to 2006 Rabbi Widzer served as the Assistant/Associate Rabbi at Temple Shalom of Newton in Newton, Massachusetts.  There he focused on youth and adult education, and various tikkun olam programs, including a dialogue group with members of a nearby mosque.  As a Student Rabbi, Rabbi Widzer served the Bahamas Jewish Congregation in Nassau, Bahamas, from 1998 to 2000.

Rabbi Widzer graduated from Brown University with a bachelor’s degree in Judaic Studies and Ethics & Political Philosophy.  He attended the Hebrew Union College-Jewish Institute of Religion, from which he received a master’s degree in 1999 and was ordained as a Rabbi in 2000.  Rabbi Widzer has engaged in ongoing professional development, including CCAR and URJ programs and seminars, the Institute for Jewish Spirituality’s Clergy Leadership Program, 2017 to 2019, and the Synagogues: Transformation and Renewal (STAR), Professional Education for Excellence in Rabbis (PEER) Executive Leadership Program, 2003 to 2004.  Rabbi Widzer has received numerous academic awards and professional recognition over his career. He has served the Reform movement on several commissions and committees.  He is an experienced spiritual leader, educator, author, and scholar.