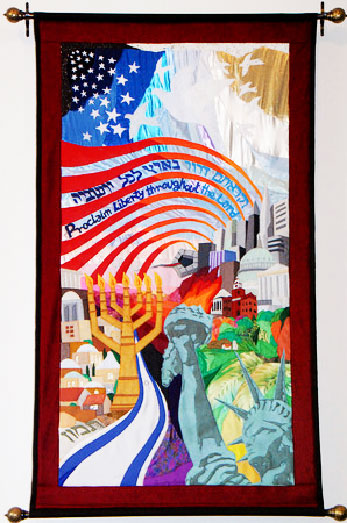 I first set eyes on this tapestry last July, in Bracha and Menachem Lavee’s Jerusalem home. It was the first tapestry that Bracha finished, and they were so excited to share it with me. Menachem hung it from the second story of their old Jerusalem home and it reached all the way to the basement floor which houses Bracha’s workroom. It appeared to be larger than life, and the power of the message and vibrancy of the colors made me realize that our dream of renovating our sanctuary would truly be a reality in 2005. Now, one year later, I still love this tapestry and have a very special place for it in my heart.

Like a mother, I don’t want to show favoritism, but the month of Tammuz is my birthday month. I was born on Sunday, the 22nd of Tammuz (you can see the Hebrew word Tammuz in the Israel section on the left). And since the best day of my life was America’s Bicentennial, thirty years ago this Fourth of July, when I married my husband, Gary, this tapestry is a celebration of much more than America for me.

When we discussed the values of our congregation that we wanted to depict on the walls of our sanctuary with our artists, we expressed our love for our Commonwealth, which was captured in the Thanksgiving tapestry, and mirrored the love of our state with our love of country. We are Americans and so many of our members currently serve or have served in our military. We are a patriotic, Washington area congregation, and even more of our members work for our government in some capacity or another.

I was fascinated to see the images that flowed from Bracha and Menachem to capture the patriotic zeal we described through their Israeli eyes. Bracha researched American historical buildings and so the Capital, Independence Hall, and the Supreme Court adorn the city landscape of America that sits upon the country landscape reminiscent of our Thanksgiving tapestry. The original tapestry design had the Twin Towers of the World Trade Center aflame with Lady Liberty’s torch, but we asked them to be replaced with the Pentagon, as we had over 10 survivors who are members of TBS and so many lost friends. We all recall lighting 184 yahrzeit lights, one for each life lost in that fatal crash of American Airlines Flight 77. It was 9/11 so close to home. Each one of us know what it felt like to drive by the Pentagon and see the hole that mirrored the hole in our lives and the damage to our personal sense of security. The hole in the Pentagon has been repaired, but we may never adequately fill the hole that was placed in our sense of security. We take our shoes off at airports, have police at every service, and endure endless debates on what will make America safe from terrorists knowing full well that we may never know an end to the cowardly terror and hatred that plagues our world, in our lifetime.

We sang God Bless America in this full sanctuary hoping to cling to faith and family in the face of terror, and we will sing it again tonight with hope and prayer that the continuous loss of life will end and give way to peace and a speedy and peaceful end to the war in Iraq, and the War on Terror, and with it an end to the struggles so many have with the loss of liberty in the name of security, and the loss of security in the name of hatred and holy war. May the doves of peace fly freely over all skies as they do in our tapestry tonight.

When I first saw the first draft of the tapestry, I asked why an America tapestry had Israel in it. The artists talked about the fact that Jews of America and Israel are linked forever, and that without America there would be no Israel. The world sympathizes more with Israel’s terrorist fears and self-protection since 9/11… who would have dreamed? Every civilian’s life is sacred and the homicide bomber betrays human decency with his or her murderous suicide. Every soldier is precious and each one’s sacrifice for freedom matters.

The words of Leviticus 25:10 are part of the flag we proudly wave for religious freedom. I pray for the day when Reform Jews have the kind of freedom in Israel that we have here in our United States of America, and the kind of respect and recognition that we treasure in this blessed land.

When William Penn created Pennsylvania’s government he allowed citizens to take part in making laws and gave them the right to choose the religion they wanted. The colonists were proud of the freedom that Penn gave them. In 1751, the Speaker of the Pennsylvania Assembly ordered a new bell for the State House. He asked that a Bible verse to be placed on the bell – “Proclaim LIBERTY throughout all the Land unto all the inhabitants thereof” (Leviticus 25:10). As the official bell of the Pennsylvania State House (today called Independence Hall) it rang many times for public announcements, but we remember times like July 8, 1776 when it rang to announce the first public reading of the Declaration of Independence.

The words of our Torah ring as clearly today as they did in 1776 or in ancient days. “Ukratem dror ba’aretz, l’chol yoshveha.”

Bracha Lavee has every color and fabric under the sun, but the only color that was not available in Israel was Statue of Liberty green. Her artist daughter mixed and spray-painted this very special color onto fabric for our tapestry. See the letters USA in dark green at the bottom of her light green sleeve. The Statue of Liberty, inscribed with the words of yet another Jew- Emma Lazarus, asking for the world’s tired and poor, inspired generations of immigrants coming to these shores in search of freedom and opportunity. She was the first face many of our grandparents and great-grandparents saw after crossing land and sea to find the Goldena Medina… the country whose streets were paved with gold.

For 350 years, Jews have been a part of America’s history. Without Haim Solomon, Washington’s army would have gone broke and American would never have been born. Solomon lost his fortune to birth America. Our contributions to this nation exceed our numbers, and our shaping of the social fabric of fairness in wage, race, justice and creativity are well documented in the annals of America’s halls of learning and in her libraries.

As Reform Jews, we recall Isaac Mayer Wise’s vision of Minhag America, one practice and religion for all American Jews that gave birth to the UAHC – the Union of American Hebrew Congregations, the first organization of Jewish congregations in this country, the Hebrew Union College, the first rabbinical school in America, and the Central Conference of American Rabbis, the first rabbinic organization in America. We, Reform Jews, were the first to create an American form of Judaism, and are currently the largest denomination of Jews in the world. We should take pride in the legacy and heritage of a Judaism that is as vibrant today as the colors of this tapestry. Wise’s vision didn’t come to fruition. We are still divided by labels that describe worship style and practice, but his contribution to birthing an American Judaism is his lasting legacy.

As American Jews, we have set the standards for practice and observance in the modern age, we have created and sustained institutions of learning, and we have provided havens all over the world for Jews who need a home. We vote, we lead, we serve, we advocate, we protest, we defend, we repair, we build, we dream, and… we remember. Judaism is the verb that has propelled us into action for social justice for all, and when we say ALL people, we have no exceptions.

I am an American Jew and proud to recite the pledge of Allegiance, as I sing the Hatikvah with pride. Some of you call yourselves Jewish Americans. The noun defines who we are in our essence; the adjective is a significant way to identify us to the world. We can love Israel while being loyal to our country of America, the land of the free and the home of the brave. How blessed we are to have this home and a homeland. Ahavat America –love for America. What a wonderful value for us to share.

Liberty’s torch is our torch. Liberty’s flame burns for us, as brightly as our Shabbat candles. Proclaim liberty throughout the land… It is what we do. It is who we are. It is our Torah and our Constitution. Happy 230th birthday America.