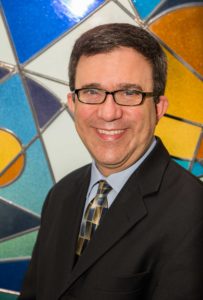 Rabbi David S. Widzer is the Senior Rabbi and spiritual leader of Temple B’nai Shalom.  He has served as a rabbi for twenty years, bringing his love of Jewish learning and living to every community he has served.  A gifted teacher of all ages, an engaged and inspiring worship leader, and a passionate pursuer of social justice, Rabbi Widzer is committed to creating connections and opportunities for families of all kinds who choose to live Jewish lives.

Rabbi Widzer served as the Rabbi of Temple Beth El of Northern Valley in Closter, NJ from 2012-2019.  During his time at Temple Beth El, the Rabbi, in his own words, “promoted values-based decision-making, mindful engagement of our members, and education innovations that have strengthened the community and enriched the Jewish lives of our members.”  He led the community in a process of assessing and planning for its future, resulting in the creation of Kol Dorot: A Reform Jewish Community, when Temple Beth El merged with Temple Beth Or in Washington Township, NJ.  Rabbi Widzer presently serves as one of the two founding Co-Rabbis of Kol Dorot.

From 2006 to 2012, Rabbi Widzer was the Rabbi of Temple Etz Chaim in Franklin, Massachusetts, where he focused on reaching unaffiliated members of the Jewish community, developed programming to appeal to a wide range of demographics, and participated in interfaith collaborations. From 2000 to 2006 Rabbi Widzer served as the Assistant/Associate Rabbi at Temple Shalom of Newton in Newton, Massachusetts.  There he focused on youth and adult education, and various tikkun olam programs, including a dialogue group with members of a nearby mosque.  As a Student Rabbi, Rabbi Widzer served the Bahamas Jewish Congregation in Nassau, Bahamas, from 1998 to 2000.

Rabbi Widzer graduated from Brown University with a bachelor’s degree in Judaic Studies and Ethics & Political Philosophy.  He attended the Hebrew Union College-Jewish Institute of Religion, from which he received a master’s degree in 1999 and was ordained as a Rabbi in 2000.  Rabbi Widzer has engaged in ongoing professional development, including CCAR and URJ programs and seminars, the Institute for Jewish Spirituality’s Clergy Leadership Program, 2017 to 2019, and the Synagogues: Transformation and Renewal (STAR), Professional Education for Excellence in Rabbis (PEER) Executive Leadership Program, 2003 to 2004.  Rabbi Widzer has received numerous academic awards and professional recognition over his career. He has served the Reform movement on several commissions and committees.  He is an experienced spiritual leader, educator, author, and scholar. 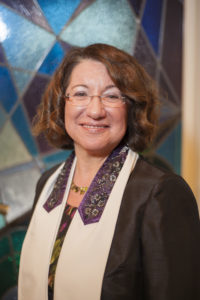 Rabbi Perlin is the first female rabbi to start a congregation, founding Temple B’nai Shalom in Fairfax Station, Virginia in 1986. She was also one of the first women to become a senior rabbi. She served TBS for thirty-two years, until retiring in 2018 as the Founding Rabbi Emerita. She is proud of having created a learned, caring community guided by and living its Jewish values to this day.

Rabbi Perlin has an A.B. degree in Near Eastern Studies from Princeton University, and an M.A.H.L. (Master of Arts in Hebrew Literature) 1980 and ordination from Hebrew Union College-Jewish Institute of Religion in NY, 1982. She received her Doctor of Divinity degree from HUC in May of 2007.

Rabbi Perlin is known as a master teacher, liturgist, counselor, spiritual advisor, rabbinic mentor,
historian, and Reform Movement leader and innovator. She is known for having sent nine rabbis to HUC-
JIR. As another first, Rabbi Perlin was also made Rabbi Emerita of the congregation’s sister Lutheran
congregation. She received commendations from every chaplain of the US military upon retirement for
her lifetime of serving her career military congregants. In 2012, she was honored by Jewish Women
International as one of its “Women to Watch.” In 2013, she was included in the Forward’s list of
America’s 36 Most Inspiring Rabbis. This past spring, Rabbi Perlin’s portrait was one of 24 women
rabbis featured in the museum exhibit “Holy Sparks,” in honor of the 50 th anniversary of women in the
rabbinate, and her interview that accompanied the show can be found at https://vimeo.com/661270474.

A committed philanthropist and lifelong Zionist, Rabbi Perlin is president of the Perlin Family
Foundation, serves on the Board of Governors of HUC-JIR where she co-chairs the Israel Committee, and
continues to mentor rabbis in the US and Israel.

She has been happily married to her husband Gary for 46 years. They are the parents of two wonderful
sons and daughters-in-law, and seven adorable grandchildren. In retirement, the Perlins live bi-coastally
in Virginia and Los Angeles, and during Covid ran a school for all the grandchildren ages 2-8.

In her spare time, Rabbi Perlin is an avid reader of mysteries, enjoys cooking and entertaining, has a
passion for home design and collecting vintage Art Deco, is a student of portraiture and is actively
involved at the National Portrait Gallery of the Smithsonian, and has traveled the world to all seven
continents.