Tapestry #8: Iyar: From Zikaron to Zion 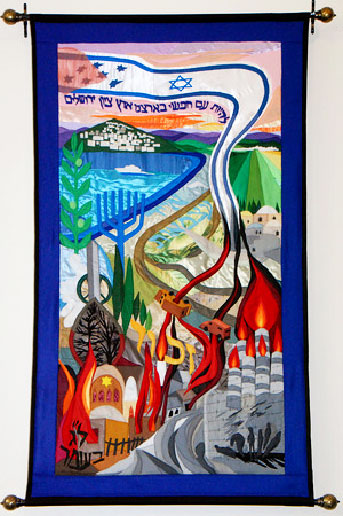 Two events, more than any other, mark the twentieth century Jewish experience, and they occurred decades apart: The Holocaust and the Birth of the State of Israel. Whether or not the State would have ever been possible in a hostile world without the guilt over the Holocaust will never be known. Suffice it to say that many believe that Israel was the phoenix that rose from the ashes of the six million.

Just as the two historical events take place just years apart, so too, on our Jewish calendar, the remembrance of these events fall within a week of one another. When I was a girl, we had to remember the Holocaust on Tisha B’av, the summer holiday commemorating the destruction of both temples in Jerusalem in 586 BCE and 70 CE, because there was no dedicated time for remembering on the calendar. Israel as a State was in its infancy and was primarily celebrated with the sale of Israel Bonds. And Yom Hazikaron, Israel’s Memorial Day, the day before Independence Day, Yom Ha’Atzmaut wasn’t even on a Jewish calendar in America.

This eighth tapestry was designed by our artists, Bracha and Menachem Lavee, for two of our B’nai Shalom values: Ahavat Yisrael (Love for Israel) and Zachor (the command to remember). Our artists chose to commemorate the month of Iyar, its holidays, and our values in this work of art. These holidays of Yom HaShoah and Yom Ha’Atzmaut fall between Passover and Shavuot (I will talk about that tapestry in two weeks!). This period is called the Omer, 49 days, or seven weeks from one holiday to another. In the Christian world, there are 50 days between Easter and Pentecost as a borrowing from the Jewish calendar. And this time has always been marked with tragedy and persecution of Jews, and celebrated as a time of mourning.

So we begin with the words, Lag B’omer in black letters in the left hand corner of the tapestry. Lag, being the 33rd day of this period we count between Passover and Shavuot, two of the three pilgrimage festivals (all represented in the tapestries) commanded in the Torah. We remember the 33rd day of the omer, because during the time of the Bar Kochva revolt against the Romans, a plague killed 24,000 students of Rabbi Akiva in this seven-week period between Passover and Shavuot. Over the centuries, the Jewish people experienced more tragedies (massacres, pogroms, etc….) during this seven-week period. To commemorate these tragedies, it has become customary to observe a period of semi-mourning during the Counting of the Omer. Weddings and other festivities were traditionally not held, live music not heard, and hair was not cut. As Reform Jews, we have fewer of these restrictions, but the tragedy and the nature of this time period is still part of our history.

Above the letters of Lag B’omer are flames and a synagogue and as we move right, there is a house ablaze. In the right hand corner of the tapestry, behind barbed wire, there are six smoke stacks of the crematoria, in the shape of candles dressed in Holocaust prisoner garb, one stack for each of the six million Jews who were killed by Hitler and the Nazis. The six shadows in the foreground in front of the barbed wire remind us that six million is not a number, it represents real people – men, women, and children who died painfully, tragically, and horribly while the world stood idly by. In yellow letters in the center at the bottom is the Hebrew word, “ZACHOR” – REMEMBER… those letters are on our High Holy day white Torah cover for our Holocaust scroll. They are inscribed on the heart of every Jew. Running through the word Zachor is a memorial candle. Running through our hearts is a pledge to never again let this happen to us, or to any other people.

We burned, our homes and synagogues burned, and simultaneously, miraculously in fact, Palestine was finally returning to the Jewish homeland promised by God in the Torah. Fighting British occupation and the Arab ties to Hitler amidst a desire to coexist with indigenous people was a struggle for those early freedom pioneers who turned dust, swamps, and poverty into the most prosperous non-oil producing country in the world.

Children ask me about the overturned truck on fire and I respond with the reminder that Israel’s freedom was secured truck by truck, lorry by lorry, road by road. In fact, if you GOOGLE the IDF (Israel Defense Forces) and explore their historical time line, the first battle in March of 1948 is called, “Battle for the Roads.” Israel’s defense force was born from resistance and every family has paid the price of life and loved ones to make the dream of an independent and free state possible for the Jewish people.

The symbols of the Israel Defense Forces, the leaf, the sword, the olive branch and an additional dove of peace to its left adorn the left side of the middle of the tapestry. We are keenly aware of the courage and sacrifice that made Israel a reality after the ink was dry at the United Nations. The Menorah, the official national symbol of the State of Israel stands proudly in blue as the word “Zachor” /Remember is in the yellow, reminiscent of the badge of shame. The stripes of military green rise up from the grey and black death camp uniforms symbolically declaring “Never again.” Europe’s colors of death camps give rise to the blues and greens of creation, in the land that came to life again in Jewish hands, as Ezekiel’s dry bones once more had life. In light blue in the middle of the page it says 5 Iyar, the date of Israel’s independence and underneath it “Atzmaut”, Independence. From Zikaron to Zion – from Memory to Independence, from darkness to light, may the sword be overcome with the olive branch of peace.

As Americans, we fought for freedom from the British monarchy on this new soil. Israel’s independence was the first modern manifestation of God’s promise for a Jewish homeland in millennia, just as it was independence from the anti-Semitism, persecution and discrimination we endured from other nations and religions for hundreds of years. Israel is a living statement of Jewish survival and continuity post-Holocaust. Independence for Israel was small act of atonement by the world community for all that was perpetrated against us. But, the dream is not yet fully realized. Terrorism and the threat of daily attack are part of every Israeli’s reality. The Israeli flag has a veil in the left hand corner. When peace and security are lasting and permanent, Bracha Lavee will come back to remove the veil. I pray it is in her, and our, lifetime.

In Israeli terms, the Jews no longer needed to live in Exile from the Promised Land. But, as American Jews, we know that not every Jews needs to, wants to, or should live in Israel. Why have one target for Jewish extermination? A thriving American Judaism ensures a safer Jewish, and Israeli, future. We place Israel on the walls of our temple to show our link, our commitment, and our love, for the nation that is symbol to the world that the People of Israel Live! — “Am Yisrael Chai!”… And so the Israeli flag rises from the fires of the greatest genocide of Jews the planet has ever known. The flag modeled after the tallit of our people, wrapping us in freedom, independence, and hope—HaTikvah.

We asked our artists to put the words of the Hatikvah on the tapestry – “Lihiyot am chofshi b’artzeinu, eretz Tziyon, v’Yerushalayim.” To be a free people in our land, the land of Zion and Jerusalem, “ just as we sing the anthem… not to be disloyal to the America we love, or even dually loyal as citizens, but to show solidarity with our brothers and sisters of Israel. Their blood shed is our blood shed. Their accomplishments are ours, and even their mistakes are ours to learn from. Together we promise to be a light unto the nations… and that is why in our American tapestry there is room for Israel, to show the connection between us and our Israeli brothers and sisters.

But, even though we sing of Jerusalem, there is no Jerusalem in this tapestry, although there was in the original design. I sent it back to the drawing board, because truth be told, Jerusalem is not Israel for me, just as New York isn’t America for me. (It’s a great city, just not a favorite) Jerusalem is not even one of my favorite places in Israel, and a few years ago we went to Israel and never even went to Jerusalem. I’m not a city person. I am a “Galilee girl.” I spent eleventh grade at the foot of Mount Tabor in the Galilee, just a quick bus ride from the Sea of Galilee depicted here in all of her beauty. But, it was not only my preference that put the agricultural Israel in this tapestry. Early Israel was all about the kibbutz and reviving the land.

The Kinneret is the only fresh water source in Israel, and as such is precious beyond words to the people. From the hills you see her beauty. From the Golan Heights, which should never leave Israel’s sovereignty, under any circumstance or negotiation,you see how small and narrow this land is… the size of New Jersey with no oil. One little puddle of water … and when I see her my heart screams to the rest of the world, “Leave us alone!” The music of Exodus which stirs my heart floods inside me, “This land is mine, God gave this land to me.” From the mountains to the agricultural fields, to the archaeological sites to the skyscrapers, to the rocks I bring home to hold on to her when we are apart, Israel is part of my heart. And tonight, is a small reminder for all of us that Israel is in the heart of every Jew. God put her there. One visit makes her a forever love. And because of all the struggles we had to endure for her to exist, we promise to love Israel, and to always “remember” … and never forget.