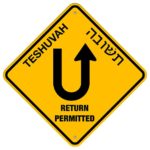 Are You Ready to Get Ready?

Lunch and Learn with Rabbi Widzer via Zoom

[Who has reached] complete Teshuvah? A person who confronts the same situation in which he sinned when he has the potential to commit [the sin again], and, nevertheless, abstains and does not commit it because of his Teshuvah alone and not because of fear or a lack of strength.

For example, a person engaged in illicit sexual relations with a woman. Afterwards, they met in privacy, in the same country, while his love for her and physical power still persisted, and nevertheless, he abstained and did not transgress. This is a complete Baal-Teshuvah. This was implied by King Solomon in his statement [Ecclesiastes 12:1] “Remember your Creator in the days of your youth, [before the bad days come and the years draw near when you will say: `I have no desire for them.'”]

If he does not repent until his old age, at a time when he is incapable of doing what he did before, even though this is not a high level of repentance, he is a Baal-Teshuvah.

Even if he transgressed throughout his entire life and repented on the day of his death and died in repentance, all his sins are forgiven as [Ecclesiastes, op. cit.:2] continues: “Before the sun, the light, the moon, or the stars are darkened and the clouds return after the rain…” – This refers to the day of death. Thus, we can infer that if one remembers his Creator and repents before he dies, he is forgiven.

What constitutes Teshuvah? That a sinner should abandon his sins and remove them from his thoughts, resolving in his heart, never to commit them again as [Isaiah 55:7] states “May the wicked abandon his ways….” Similarly, he must regret the past as [Jeremiah 31:18] states: “After I returned, I regretted.”

[He must reach the level where] He who knows the hidden will testify concerning him that he will never return to this sin again as [Hoshea 14:4] states: “We will no longer say to the work of our hands: `You are our gods.'”

He must verbally confess and state these matters which he resolved in his heart.

Anyone who verbalizes his confession without resolving in his heart to abandon [sin] can be compared to [a person] who immerses himself [in a mikvah] while [holding the carcass of] a lizard in his hand. His immersion will not be of avail until he casts away the carcass.

This principle is implied by the statement, [Proverbs 28:13], “He who confesses and forsakes [his sins] will be treated with mercy.”

It is necessary to mention particularly one’s sins as evidenced by [Moses’ confession, Exodus 32:31]: “I appeal to You. The people have committed a terrible sin by making a golden idol.”

Among the paths of repentance is for the penitent to

It is very praiseworthy for a person who repents to confess in public and to make his sins known to others, revealing the transgressions he committed against his colleagues.

He should tell them: “Though I sinned against so and so, committing the following misdeeds…. Behold, I repent and express my regret.” Anyone who, out of pride, conceals his sins and does not reveal them will not achieve complete repentance as [Proverbs 28:13] states: “He who conceals his sins will not succeed.”

When does the above apply? In regard to sins between man and man. However, in regard to sins between man and God, it is not necessary to publicize one’s [transgressions]. Indeed, revealing them is arrogant. Rather, a person should repent before God, blessed be He, and specifically mention his sins before Him. In public, he should make a general confession. It is to his benefit not to reveal his sins as [Psalms 32:1] states: “Happy is he whose transgression is forgiven, whose sin is covered.”

Even though repentance and calling out [to God] are desirable at all times, during the ten days between Rosh HaShanahand Yom Kippur, they are even more desirable and will be accepted immediately as [Isaiah 55:6] states: “Seek God when He is to be found.”

When does the above apply? To an individual. However, in regard to a community, whenever they repent and cry out wholeheartedly, they are answered immediately as [Deuteronomy 4:7] states: “[What nation is so great that they have God close to them,] as God, our Lord, is whenever we call Him.”

Yom Kippur is the time of Teshuvah for all, both individuals and the community at large. It is the apex of forgiveness and pardon for Israel. Accordingly, everyone is obligated to repent and confess on Yom Kippur.

The mitzvah of the confession of Yom Kippur begins on the day’s eve, before one eats [the final meal], lest one choke to death in the meal before confessing.

Although a person confessed before eating, he should confess again in the evening service, Yom Kippur night, and similarly, repeat the confession in the morning, Musaf, afternoon, and Ne’ilah services.

At which point [in the service] should one confess? An individual confesses after the Amidah and the Chazan confesses in the midst of the Amidah, in the fourth blessing.

Teshuvah and Yom Kippur only atone for sins between man and God; for example, a person who ate a forbidden food or engaged in forbidden sexual relations, and the like. However, sins between man and man; for example, someone who injures a colleague, curses a colleague, steals from him, or the like will never be forgiven until he gives his colleague what he owes him and appeases him.

[It must be emphasized that] even if a person restores the money that he owes [the person he wronged], he must appease him and ask him to forgive him.

Even if a person only upset a colleague by saying [certain] things, he must appease him and approach him [repeatedly] until he forgives him.

If his colleague does not desire to forgive him, he should bring a group of three of his friends and approach him with them and request [forgiveness]. If [the wronged party] is not appeased, he should repeat the process a second and third time. If he [still] does not want [to forgive him], he may let him alone and need not pursue [the matter further]. On the contrary, the person who refuses to grant forgiveness is the one considered as the sinner.

[The above does not apply] if [the wronged party] was one’s teacher. [In that instance,] a person should continue seeking his forgiveness, even a thousand times, until he forgives him.

It is forbidden for a person to be cruel and refuse to be appeased. Rather, he should be easily pacified, but hard to anger. When the person who wronged him asks for forgiveness, he should forgive him with a complete heart and a willing spirit. Even if he aggravated and wronged him severely, he should not seek revenge or bear a grudge.

This is the path of the seed of Israel and their upright spirit. In contrast, the insensitive gentiles do not act in this manner. Rather, their wrath is preserved forever. Similarly, because the Gibeonites did not forgive and refused to be appeased, [II Samuel 21:2] describes them, as follows: “The Gibeonites are not among the children of Israel.”

If a person wronged a colleague and the latter died before he could ask him for forgiveness, he should take ten people and say the following while they are standing before the colleague’s grave: “I sinned against God, the Lord of Israel, and against this person by doing the following to him….”

If he owed him money, he should return it to his heirs. If he is unaware of the identity of his heirs, he should place [the sum] in [the hands of] the court and confess.